The “supersonic rocketmobile” looks suspiciously like a VW microbus with a fake rocket strapped to the roof.

I want to stay at the Space Age Lodge, or eat at the coffee shop at the very least.

I was an “Addams Family” guy but how can you not love this photo.

Word processing has transformed the way writers work, a transition from typewriters to electronic writing that happened in a  few short years, starting in the mid-70s and ending by 1984 and 1985. The transition has been largely overlooked by literary historians, but now Matthew Kirschenbaum, an English professor at the University of Maryland, has written a history, “Track Changes” (great title!). He talked with Robinson Meyer at The Atlantic: How to Write a History of Writing Software

Writers of genre fiction — particularly science fiction — adopted word processors long before literary writers. That’s not necessarily because science fiction writers are technology focused (I’ve been surprised myself by how Luddite science fiction fans can be in their real-life use of technology), but because genre writers need to work fast, and turn out a lot of work at high volume.

[Kirschenbaum’s] new history joins a much larger body of scholarship about other modern writing technologies—specifically, typewriters. For instance, scholars confidently believe that the first book ever written with a typewriter was Life on the Mississippi,by Mark Twain. They have conducted typographical forensics to identify precisely how T.S. Eliot’s The Wasteland was composed—which typewriters were used, and when. And they have collected certain important machines for their archives.

One day, a similarly expansive body of work may exist for writing software—and Kirschenbaum will be one of its first builders.

In the interview, Kirschenbaum addresses the question of which author was the first to write a novel with a word processor.

We can’t know with absolute certainty, I don’t think, but there are a couple of different answers.

If we think of a word processor or a computer as something close to what we understand today—essentially a typewriter connected to a TV set—there are a couple of contenders from the mid- to late-1970s. Notably Jerry Pournelle, who was a science fiction author. He is probably the first person to sit and compose at a “typewriter” connected to a “TV screen”—to compose there, to edit, and revise there, and then to send copy to his publisher. That was probably a novella called Spirals.

But there are earlier examples. Len Deighton, a highly successful author of British high-tech espionage thrillers, bought an early IBM word processor in the late 1960s. It wasn’t recognizably related to the word processors of today; the user typed on an IBM Selectric MS/ST typewriter that simultaneously recorded text on magnetic tape and conventional paper.

Kirschenbaum notes that secretaries, usually women, were the first to use word processors. Indeed, I remember that in the 1980s and well into the 1990s, successful men couldn’t type — typing was clerical, menial work, something that most men simply did not do. The transition to personal computers led to a brief bloom of typing classes — although the word “typing” had girl-cooties, so these classes were called “keyboarding,” or even “executive keyboarding.”

Me, I knew from a young age that I wanted to be a writer, and even in the late 70s it was obvious to many of us that personal computing was the future. I taught myself to touch-type when I was about 12 years old, and I took a typing class in high school to brush up on those skills, along with a few male friends who were also active in the computer club.

Back to Kirschenbaum: Even though the MS/ST lacked a screen, he calls it the first word processor because it stored the text electronically.

Your “screen” was the sheet of paper you had in your Selectric typewriter. You did your typing on the Selectric—which is the same typewriter, for example, we see in Mad Men; it’s a famous ’60s-era electric typewriter—and if you made mistakes, you would backspace. You would get a mess on the sheet of paper that was currently on the Selectric, but the correct sequence of character strokes was being stored on the tape. Then you would put a clean sheet of paper into the typewriter and it would automatically print out, sort of player-piano fashion, the text stored on the tape’s storage.

This unit sold in the 1960s for $10,000. That’s obviously quite a lot of money, and IBM used the term word processing as a marketing device.

Deighton wrote on a conventional Selectric, then handed the typescript to his secretary, Ellenor Handey, to retype it using the MS/ST. Therefore, I call shenanigans on Kirschenbaum’s classifying Deighton as the first author to use a word processor, simply because he wasn’t the one using the MS/ST. Still, it’s an interesting anecdote — Deighton was on the edge between non-word-processor users and word-processor users.

And importantly, Kirschenbaum says the essential thing about the word processor isn’t the screen, it’s the fluid, electronic nature of the text.

Microsoft Word is still the gold standard for writing software; even people who write primarily for the Internet — including most of the technology journalists I know — use Word. That absolutely flummoxes me. Even today, Word  seems to me to be software designed primarily to produce printed hardcopy, often ornately formatted in ways that writers don’t care about. It’s not designed for articles, blog posts, or books; it’s designed for corporate annual reports.

Until recently, I preferred to write in text editors designed by and for software developers. Now, there’s a new generation of word processing software developed primarily for people who write electronically; Ulysses for Mac is one of those apps, which is the one I use. Scrivener is a more well-known example.

A lot of writing today gets done in email applications and web browsers — specifically the text entry box of Facebook, Twitter, etc. I’m writing this post in the composition window of WordPress. I’m writing on a plane (Kirschenbaum discusses how word processors have changed WHERE we write, as well as how), and I don’t currently have an Internet connection. I really, really hope I don’t lose my work, but WordPress is pretty good about that.

And of course, writing on mobile phones is hugely popular. Maybe the people who are toddlers today will never learn to keyboard; they’ll just thumb-type.

Kirschenbaum also talks about writers he calls “refuseniks,” who were adults in the 70s and 80s and who refused to use word processors. Harlan Ellison is possibly the most outspoken example, still pounding away at a typewriter. Cormac McCarthy is another example.

Another example, not mentioned by Kirschenbaum in this interview: Our friend the science fiction writer Joe Haldeman, author of “The Forever War” and a couple of dozen other, excellent novels. Joe is no refusenik; last time I talked tech with him he was a user of a Mac, iPad, and iPhone. But he likes writing his first drafts in fountain pen on bound, blank books. He says he just writes better that way.

I’ve added Kirschenbaum’s book to my Amazon Wishlist. And, hey, there’s another idea for a book: How digital technology changes the way we read. When I was a teen-ager back in the 70s, I could easily read two or three books every week. Now, I read a half-dozen books a year, if that. I have to make a conscious effort to set aside some time every day to read books. Most of my reading time is taken up reading articles.

In a 1964 essay for the New York World’s Fair, Asimov looked ahead to a prosperous world of 2014 — 50 years in the future. Among his visions: Suburban houses would move underground, leaving the surface free to agriculture and parks.

In the real world of 2016, people are moving underground, but only where economics drive them there, in densely crowded cities like Beijing, says Megan Logan on Inverse.

Underground spaces aren’t exactly inviting and homey by nature. More than that, though, being underground taps into a baser fear or instinct of being buried alive, which doesn’t necessarily scream “rest and relaxation.”

I think these are solvable problems, piping in fresh air and using fiber optics or some similar technology to direct natural light to where people are.

On the other hand: Our bedroom overlooks the backyard deck. A few years ago we decided to put a roof on the deck, which blocked out direct light in the bedroom. Our thinking at the time was, who needs sunlight in the bedroom? The only time you use the bedroom is at night, right? And we like sleeping late when we can, so more darkness in the bedroom is good, right? I still sometimes regret that decision — I underestimated the pleasures of waking up to sunlight.

I think Logan overlooks one major reason Asimov predicted underground housing in 2014 — and vast, closed-in cities in stories such as the novel “The Caves of Steel.” Asimov was a self-described “claustrophile.” He loved closed-in artificial spaces. That’s one of the reasons he wrote so many hundreds of books; he was happiest alone in a small, windowless room, lit by artificial light, tapping at his typewriter.

The voice of the robot died in 2012: Dick Tufeld dies at 85; actor who intoned ‘Danger, Will Robinson!’ 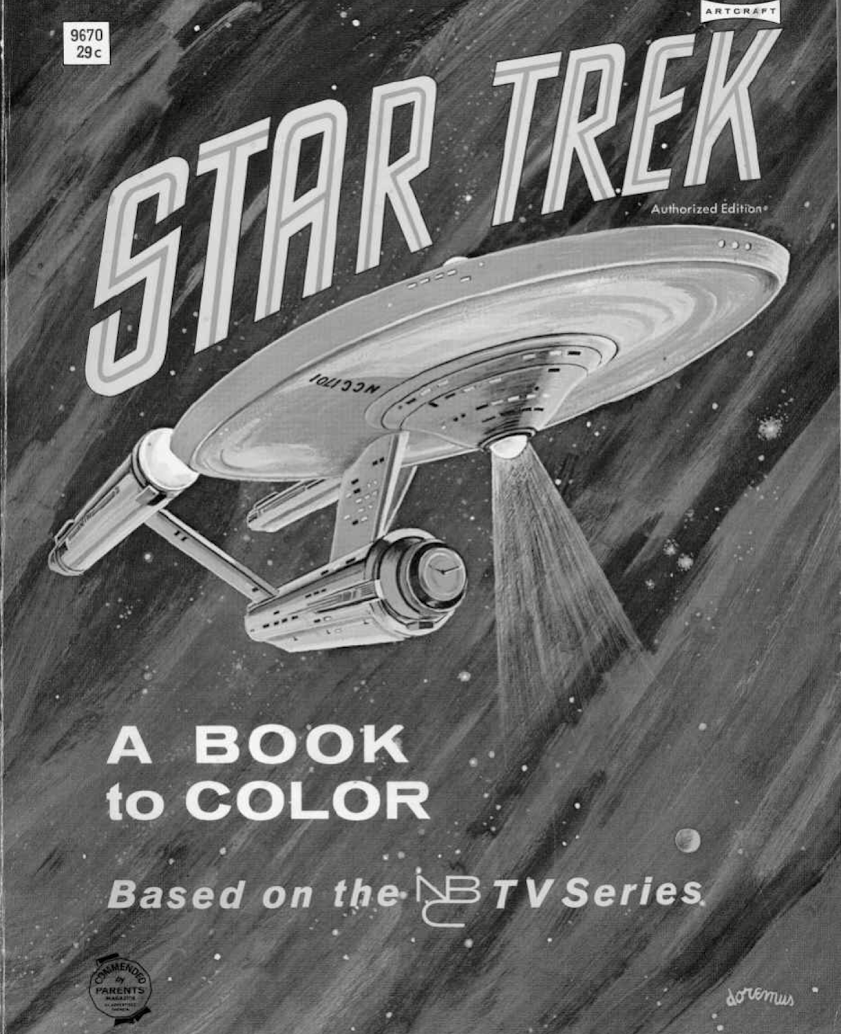 Some of the photos are quite attractive. I’ve selected the others, above. Heh.

This is the same exterior on the Desilu backlot that was used for The Andy Griffith Show.

From the book These are the Voyages, TOS, Season One, by Marc Cushman and Susan Osborn

Wild-ass guess: This photo may have been staged for an ad, maybe for hairspray or something like that. It’s too “on the nose,” as we say here in the 21st Century.

The Salton Sea later dried up and became an ecological nightmare.

Disappointingly, this isn’t a dirty picture of a woman showing her junk.