Despite rumors of a border crisis, San Diego has both the lowest murder rate and overall violent crime rate of the 30 largest American cities in 2018. And other border cities are nearly as safe.

It’s as if the border crisis is a colossal lie told by a President whose previous career was as a con man.

Opinion: If There’s a Crisis on The Border, Why Is San Diego So Safe?

46% of the population of San Diego was born here. Voice of San Diego thinks that’s low. But it seems high to me — I would have thought it was single-digits.

Our former next-door-neighbors lived in the same house something like 50 years. That’s extraordinary rootedness for this time and place. But they weren’t born in California; they moved here during World War II.

This is, as Voice of San Diego says, a city, and county, of transplants.

Duncan Hunter needs to draw out his trial to keep collecting a Congressional paycheck, according to one theory.

I still can’t believe East County voters went for this jamoke. If it had been ANY OTHER REPUBLICAN NOT ACTUALLY UNDER INDICTMENT, I would’ve shrugged it off. Conservative district. Uphill battle. But this clown?

What makes it particularly painful is that Ammar Campa-Najjar would’ve made a terrific Congressman.

And he will make a terrific Congressman, once Hunter is in prison, where you don’t have to worry about paying for food, lodging, or clothes.

I decided to sleep in this morning and did not even try to buy tickets. I get most of my Comic-Con enjoyment from going downtown and people-watching.

My earlier Comic-Con post makes me sound disgruntled. I’m not. Sure, I’d prefer that Comic-Con made it easier for me to buy tickets. But it’s not my business. I’m happy they’re here in San Diego, doing the work they do.

I’m hoping to get a Saturday ticket, but will be happy with any one day.

It’s unfair that people who bought last year get first crack at tickets. What about those of us who tried last year and failed? But it’s the concom’s bat, ball and backyard so they make the rules.

The restaurant has been closed and vacant since the 1980s, and the prominent sign is a Hillcrest landmark. I’m sure the property is worth a lot of money, but the owners didn’t seem to care.

We saw this sign on a costume shop on La Mesa Blvd.

Older workers are finding it harder to get jobs in Silicon Valley, say Carol Hymowitz and Robert Burnson at Reuters. So they take steps to seem younger and fit in. They hang around the parking lots of companies to see how their prospective colleagues dress, They study Reddit and other social platforms to get up to date on the latest pop culture references. They hang up their business suits and bowties. And they even go in for plastic surgery and lawsuits.

The national economic implications of a taco truck on every corner – Philip Bump, The Washington Post

Here in San Diego we do not have a taco truck on every corner but we do seemingly have a taco stand — or two or three — on every street. And they all seem to have names ending in -erto: Roberto’s, Umberto’s, etc. Somehow we bear the yoke of this cruel oppression.

A woman carrying a parasol to protect herself from the sun.

Minnie’s reaction: Very excited. She wanted to plaaaaaaaaaay. Which was strange — we’ve seen women at the park many times carrying umbrellas to protect themselves from the sun. Is a parasol that different? Guess so if you’re a dog.

Related: Minnie has different reactions to wheeled human-powered transportation machines: She’s afraid of conventional bicycles, loves skateboards and scooters and wants to plaaaaaaay, and is indifferent to recumbent bikes.

That was a first. Lake Murray parkgoers are a very diverse bunch, which is one of the reasons I like it. We see people of all races and ethnic groups. We see Orthodox Jews, Hasids, and Muslims in traditional garb. But we’ve never seen robed Buddhist monks at the park before.

They didn’t seem to be doing too well with the jogging.

More or less 11. About ten of them were similar size and color, more-or-less golden-retriever-like. The 11th was half that size, with long wiry fur, and trailing far behind them on a long lead.

Minnie’s reaction: Indifferent, thank goodness. If Minnie had gotten excited and the dogs had gotten excited, that would have been some kind of Disney live-action comedy movie starring Dean Jones, with dogs barking excitedly and leashes getting tangled and me ending up in the lake.

We’ve been using Sonia Shoemaker and her husband Dennis at Pet Pals for nearly 20 years but Julie is the one who interviewed them and the only time I’ve met either of them was almost that long ago, when we got our dates confused and Sonya came to the house early, while I was in the living room, finishing packing. I admit when I heard the key in the door and realized what was going on I kept quiet just to see what would happen when she opened the door and saw me there. She was gratifyingly startled. (Pet Pals does a great job, by the way. If you’re in San Diego and need a pet sitter, they’re the guys to call.)

The attacks left two dead and two in critical condition. Anthony Alexander Padgett, 36 was arrested and charged on two counts of murder, two counts attempted murder, and one count of arson.

I spotted these bumper stickers on a truck parked outside Lake Murray.

It doesn’t look intense from the photo. But trust me it was intense.

So many benefits to this plan. Wonderful!

SAN DIEGO — Cars will have to share downtown San Diego’s streets much more evenly with bicyclists and pedestrians under an ambitious new plan that aims to boost safety and fight climate change.

The long-term plan, which the City Council unanimously approved on Tuesday, would transform many vehicle lanes and some on-street parking into miles of protected cycling lanes and pedestrian promenades.

It aims to reverse an oversight by city planners decades ago, when they designed downtown’s streets with travel lanes only for cars and sidewalks only for pedestrians — leaving bicycles out of the equation. 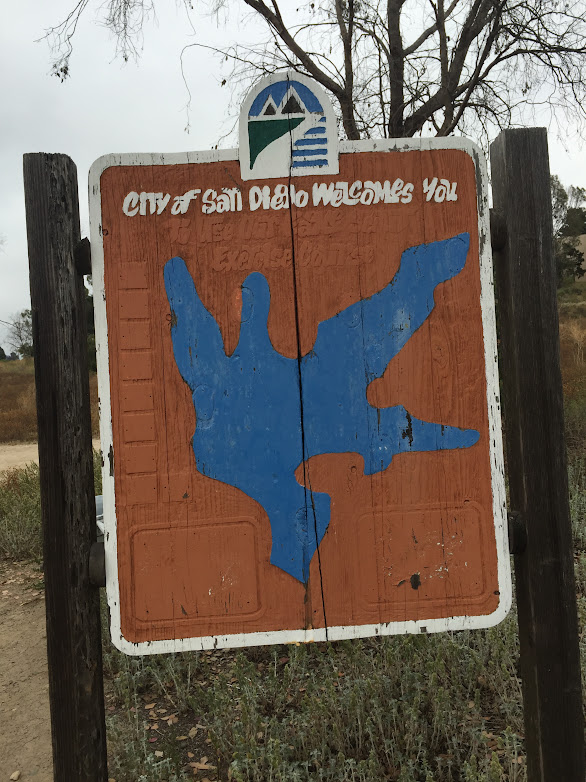 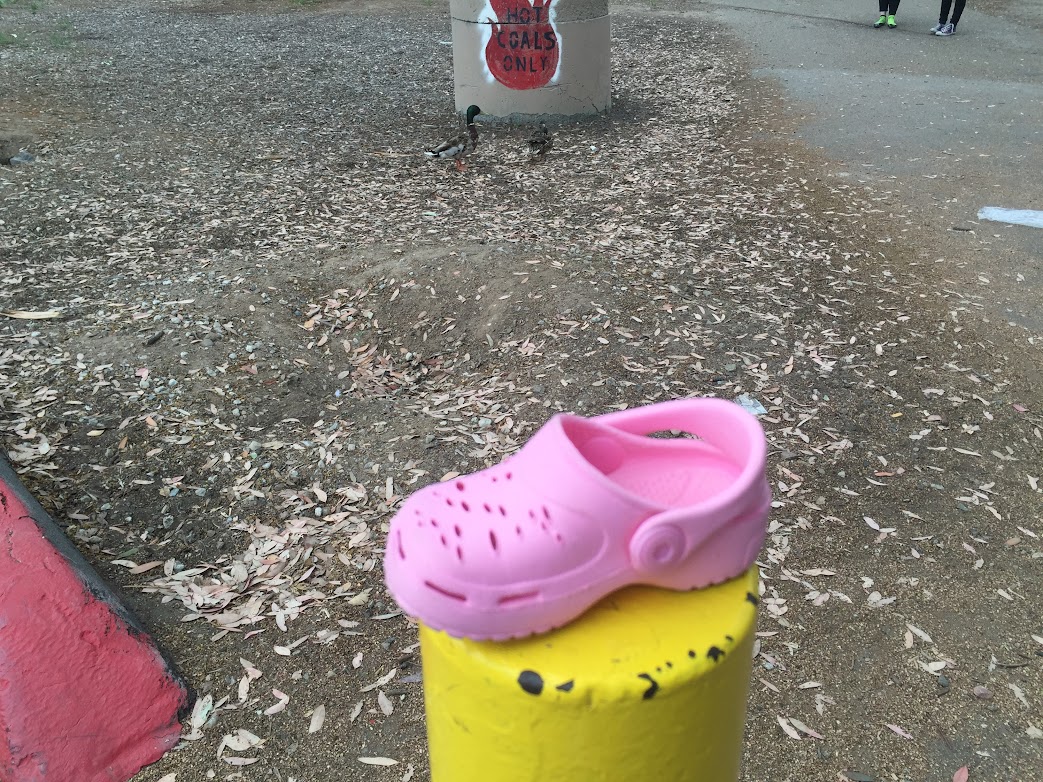 Gratuitous arty photo of a girl’s pink Croc on a post at Lake Murray, with a fire pit in the background and a red post to one side.

Not posed. I found it this way.

POWAY, Calif. – A man who claims 1,700 kickballs from a neighboring elementary school have hit his house, destroyed his property and even killed his dog sent a disturbing message to parents Thursday.

Scott Rings posted a large sign on the Midland Elementary School fence bordering his yard that states, “Your basketball killed my dog.” He also strung up nearly 100 deflated balls on the fence and a picture of the dead dog.

Rings says he hung the sign to inform parents and teachers of his ten-year battle with the Poway Unified School District.

“I have no animosity towards the kids, never blamed the kids for the 1,700 balls,” Rings said. “I always blamed the district and the school for negligence.”

But many parents who heard about the sign say they are concerned for the safety of their children.

He says his dog died of shock two years ago.

Man accuses students of killing his dog with their kickballs – Shelly Wilford, Fox 5

Gene Kang and a CBS8 news team explore the forgotten tunnel under El Cajon Blvd. in San Diego, built more than 80 years ago as part of a network of underground pedestrian crosswalks.

We had a homeless camp set up on the periphery of our neighborhood a short time ago. I called the police a few times to get the homeless people to move on. So I’m sympathetic to the neighborhood concerns there. If what they did was wrong, I’m no better than they are.

As a society, we need to do better for our citizens than create an economy where sleeping under a highway overpass seems like your best option, and then taking that away from them too.

Some citizens of San Diego are urging the government to let the homeless set up micro-houses on vacant lots. Sounds like a good idea to me.