“I once picked up a guy from the Hellfire club, an S&M club, and by the time I dropped him off on the Upper East Side, he had changed his leather cap and everything and put on a pink oxford shirt and some penny loafers. ‘Good morning, sir,’ the doorman said.”

A Long Island teenager told police all about his gang, MS-13. In return, he was slated for deportation and marked for death. By Hannah Dreier, with Kavitha Surana and Ryan Gabrielson, in a powerful April, 2018 report. https://features.propublica.org/ms-13/a-betrayal-ms13-gang-police-fbi-ice-deportation/

Charming 1995 article about a New York woman’s 16-year love/hate relationship with her rent-controlled apartment. $475/mo. for a two-bedroom on Riverside Drive? Even in 1995 that’s a miracle.

On MSNBC, @DonnyDeutsch gets it exactly right on Trump.

This is what will bring him down, and why it is entirely inevitable at this point. pic.twitter.com/J0YuMHBYbc

This is what will destroy Donald Trump and his family. Not Russia, not the women, not his campaign finance. His real-estate business has been a shady, criminal enterprise for 30 years and plenty of people in New York know it.

And those of us who didn’t know it … knew it. Trump has been a figure on the New York gossip pages for nearly 40 years, and from the beginning everybody knew he was dirty. You might find him entertaining — you might even like him and admire his chutzpah — but you wouldn’t want to do business with him, because you knew he’d rip you off.

Workers putting holiday decorations on New York’s Holland Tunnel put the tree over the “N” instead of the “A,” and put a wreath over the “U,” turning the Tunnel into a “Tonnel.” This is making people with OCD nuts.

The days of double-digit smartphone growth are over — and the next decade may start to see smartphone sales decline.

“The New York Police Department on Tuesday unveiled plans to deploy 14 [drones] and to train 29 officers to operate them, opening an intense debate about whether an agency previously criticized for illegally surveilling citizens should possess such powerful technology.”

Cops say the drones would be used for monitoring big crowds, investigating hazardous waste spills, handling hostage situations and reaching remote crime scenes, among other jobs. “They will not be used for routine police patrols, unlawful surveillance or to enforce traffic laws, the officials said. Nor will they be equipped with weapons…. ”

But civil rights activists are concerned about “mission creep” — spying on black and Hispanic neighborhoods, and exploitation by the Trump administration to target illegal immigrants.

The Rossleigh Court. Northwest Corner of 85th Street and Central Park West. New York 1908. Suites of four, five, six and eight rooms with one or two baths, and are equipped with every modern convience. The trim is of quartered oak and mahogany. Kitchens are wainscoted with marble five feet high; porcelain tubs and sinks, nickel plated plumbing, and garbage closet. Special service elevators connect with each apartment. Rents from $1,700 to $3,100. Arch. Mulliken & Moeller

Justice Saliann Scarpulla noted that the defendants “have failed to cite a single case in which any court has dismissed a civil action against a sitting president on Supremacy Clause grounds, where, as here, the action is based on the president’s unofficial acts.”

The Elevator-Phobes of a Vertical City: “My record up is 22 flights. My record down is 50. That’s at my parents’ place in Tribeca. They moved to the city a few years back and gleefully flocked to a 50th-floor apartment with truly stunning panoramic views. They tell me they love me, but sometimes I’m not sure.” (Topic)

“Amazon Is Getting at Least $1.7 Billion to Come to Queens. Now Comes the Fight Over Whether It’s Worth It” [The New York Times]

Taxpayers pay the bill, investors get the rewards. I’m reminded of the 2008 Wall Street bailout, where the slogan for opponents was “socialized risk, privatized profit.”

“This week, stories about people trying their best to turn themselves into something else—like a badger. Or a professional comedian, in a language they didn’t grow up speaking,” on the This American Life podcast.

Scientist Charles Foster wanted to get into the heads of animals, so he did it by spending weeks trying to live life as a badger, sleeping in a burrow and crawling around on the forest floor with his eyes blindfolded, getting by on just his sense of smell. And he ate what badgers eat — worms.

Also: “French comedian Gad Elmaleh is known as the Jerry Seinfeld of France. He sells out arenas. Gets recognized on the street. But he’s deciding to give all of that up to try to make it big in America. In English, which he hasn’t totally mastered. And what’s funny in French, to French people, is not the same as what’s funny in English, to Americans.”

And a New York terrier tries to rediscover his roots as a rat-hunter.

Trump gave at least $45,000 to the campaign of Alan Hevisi, a New York state comptroller who later went to prison for bribery. The donations coincided with a $500 million lawsuit Trump filed against the City of New York to reduce property taxes. Soon afterward, the city settled, saving Trump $97 million. (Christina Wilkie, The Huffington Post)

In her presidential bid, Hillary Clinton has made job creation a centerpiece of her platform, casting herself as a pragmatist who would inspire “the biggest investment in new, good-paying jobs since World War II.’’

Her argument that she would put more Americans to work has focused on her time in the Senate, when she took on the mission of creating jobs in chronically depressed Upstate New York. As her husband, former president Bill Clinton, put it recently, she became the region’s “de facto economic development officer.”

But nearly eight years after Clinton’s Senate exit, there is little evidence that her economic development programs had a substantial impact on upstate employment. Despite Clinton’s efforts, upstate job growth stagnated overall during her tenure, with manufacturing jobs plunging nearly 25 percent, according to jobs data.

The former first lady was unable to pass the big-ticket legislation she introduced to benefit the upstate economy. She turned to smaller-scale projects, but some of those fell flat after initial glowing headlines, a Washington Post review shows. Many promised jobs never materialized and others migrated to other states as she turned to her first presidential run, said former officials who worked with her in New York.

Clinton’s self-styled role as economic promoter also showcases an operating style that has come to define the political and money-making machine known to some critics of the former first couple as Clinton Inc. Some of her pet economic projects involved loyal campaign contributors, who also supported the Clinton Foundation, The Post review shows.

As New York Senator, Clinton sent lucrative business to private companies to deliver jobs to upstate New York. The jobs didn’t materialize, and the companies contributed financially to the Clinton campaign and foundation.

Unlike the mailgate and Benghazi nonsense, this matters. It might make me support the Republicans — but sadly the Republican candidate is a crazy shouty homeless guy.

Filmmaker Casimir Nozkowski remembers the building where he grew up on the Lower East Side of Manhattan, a former synagogue, whiskey distillery, and shower curtain and raincoat factory that his parents rented as a loft for 45 years.

New York Times photo editor Stacey Baker spends some of her free time photographing the legs of women on the streets of New York. Now it’s a book.

I watched about a minute of this and got bored. Then I found myself thinking at odd moments of the day about these people’s body language, facial expressions, and hand gestures. So I came back and watched the whole thing.

As The Gothamist says: “This isn’t about mockery—it’s about empathizing with straphangers in our collective daily struggle to get where we’re going.”

The law would have required tech companies to provide information about how to repair devices, but big tech companies including Apple and Cisco blocked it from even coming to a vote. Similar measures have been blocked in Minnesota, Nebraska, Massachusetts, and previously in New York. 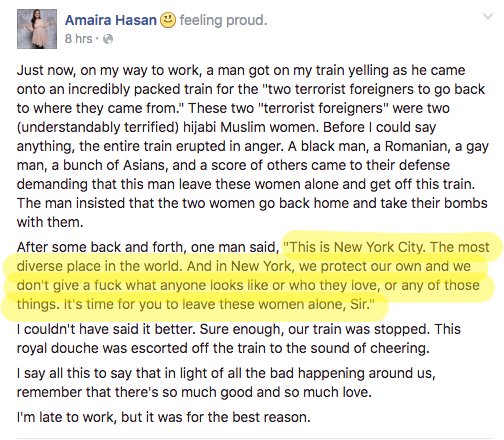 Source: Michael T. Rose on Twitter: “I move we replace “The City That Never Sleeps” with this for NYC motto

Because of loopholes in disclosure laws for large cash transactions, real estate is a great way to launder money. So if you’ve got a million dollars in illegally obtained cash lying around, a luxury Manhattan apartment is a good place for it.

How To Hide A Million Dollars In Plain Sight – Planet Money

There are apartments in cities around the world where the lights do not go on at night. The apartment is empty. And it’s hard to tell who owns it or where the money to buy the apartment came from.

And that’s because some of that money is from questionable origins. If you have a lot of money to hide, you can park that cash in real estate. You hide the money in plain sight. You turn a fancy apartment into a giant piggy bank or secret vault.

On today’s show, the international quest to try answer a simple question: Who owns Apartment 5B?

This excellent photo was staring me in the face from my Long Island historic wall calendar last month. Google Image Search helped me find more information about it.

Mystery Foto #42 Solved: The Vehicles and Many Cool Things in this 1908 Freeport Garage Photo