Why would Amazon and Facebook want to predict the end of a relationship? “When a relationship ends, people go shopping.” [E.J. Dickson] https://www.vox.com/the-goods/2019/1/2/18159111/amazon-facebook-big-data-breakup-prediction

dreichert87 says: “My niece is in 5th grade and got her first love note. This 5th grader has more game than I’ll ever have.” 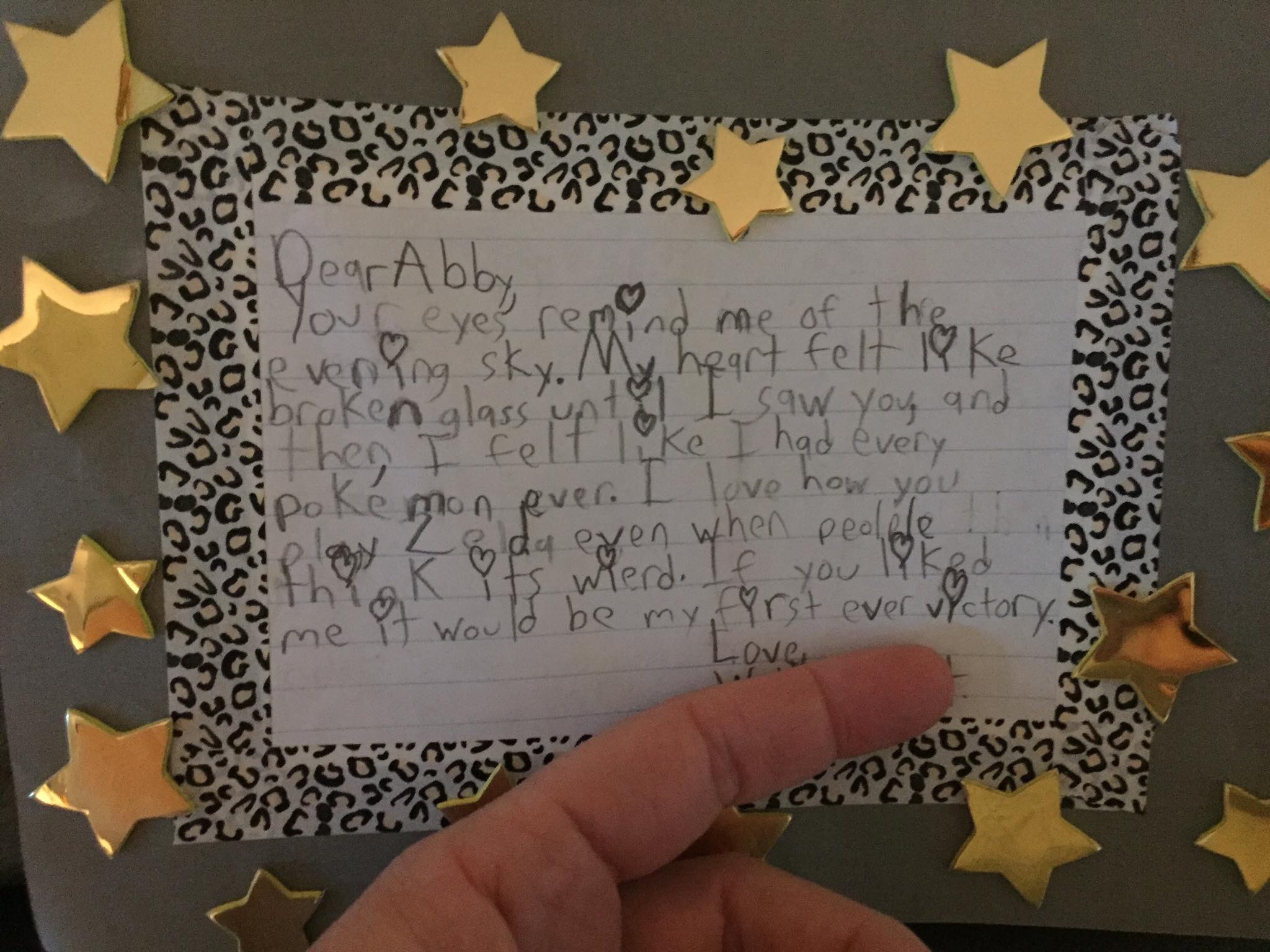 My Big Fat Greek Wedding 2? Sure, why not? If you didn’t love the first movie you’re probably a serial killer.

Liam Lowery and Marisa Carroll have a charming, if almost archetypal, New York love story. They were college students. Liam had been crushing on her for a while, and one day, he spotted her on the subway. They came to his stop. And he stayed on the train. That led to coffee, Facebook flirting, making out, and as Liam says, fantastic sex.

When they got together, Liam identified as trans, but didn’t yet have that scruff on his cheeks. Soon after they began dating, he started taking testosterone, and he had surgery to remove his breasts last spring. While Marisa had considered herself a straight woman prior to dating Liam, they are, together, in a queer relationship. And as of this Thanksgiving, in a queer marriage.

Lowery says no one other than a medical professional had seen him naked until he met Carroll. Not even himself — when he bathed, he’d get in the shower and scrub himself as fast as he could without looking.

Good podcast, but not a great headline. Savage doesn’t say cheating is ok. He says you should decide with your partner what your commitment will be regarding other sexual partners, and then honor that commitment.

He also says that most monogamous marriages experience cheating at least once, and that’s not OK. It’s WRONG WRONG WRONG. But if you love each other, the marriage can survive it and do OK afterward.

Savage describes his own marriage as “monogamish.”

The 80s influences of “Stranger Things” are obvious — Stephen King, Steven Spielberg, the “Goonies” and other 80s movies that appealed to preadolescents of that decade. But Joshua Rothman at The New Yorker finds an older, darker influence: H.P. Lovecraft

The scientific worldview says that the universe is neutral. It doesn’t care if you live or die. But Lovecraft had a different view: The universe is evil. It hates us. And it’s supremely powerful, inhabited by entities who are to us as we are to insects, and are eager to torment us just for giggles. In Lovecraft’s view, the Earth is a tiny little island of relative safety that could open to that wider, hostile universe with a single pinprick of reality. In Lovecraft’s view, the pinprick came from miscegenation — racial contamination — Lovecraft was a full-throated bigot who hated and feared brown-skinned people and Eastern and Southern Europeans.

But Lovecraft has many heirs and imitators today, and they substitute other forces for racial impurity. In the case of “Stranger Things,” the horror is unleashed by US government scientific bureaucracy, as it often is in King’s novels.

Rothman identifies two target audiences for “Stranger Things:” Adults who were children in the 80s and view the series as a big ol’ nostalgia wallow, and children who look back on that era as a golden age before they were born, sort of like the 50s were viewed when I was a teen-ager in the 70s.

I’m from an older generation; I turned 20 in 1981. I enjoyed the nostalgia of “Stranger Things” because the period portrayed on the show was not all that different from the early 70s, when I was the same age as the show’s child heroes. As kids in the early 70s, we roamed freely around the neighborhoods on our bikes and engaged in nerdy pursuits without parental supervision. We didn’t have Dungeons & Dragons; that hadn’t been invented yet. But we played marathon games of Risk.

This idea of the universe being actively hateful and evil is a new one for me. I’m a rationalist, I don’t believe that the real universe is evil. An indifferent universe can be hostile enough at times.

But the idea of an actively hostile and evil universe certainly opens possibilities for fantastic fiction.

She had pneumonia and didn’t disclose it. Indeed, it seems likely she tried to cover it up. Exactly what her opponents have accused her of doing.

Don’t panic if you can’t think of a career path that’s a perfect fit. In large part, this is because interests are not just discovered, they’re developed. Scientists have learned that the sort of enduring fascination that commencement speakers like to praise usually takes time and experience to bloom fully.

For instance, when she graduated from Smith College, Julia Child had no idea that she would fall in love with French cuisine in her late 30s. She had no inkling that writing cookbooks and teaching on television would one day become her calling.

A good-enough fit is a more reasonable aim than a perfect one. Consider your first job as an opportunity to begin an unpredictable, inefficient trial-and-error process. The violist Roberto Díaz told me he didn’t know he’d love the viola before he tried it, and his tepid reaction to the violin could not have foretold the lifelong love affair he has had with the ever-so-slightly-larger viola.

As I said to one young man who, on the cusp of his first real job, was paralyzed by indecision: “Don’t overthink it. Move in the direction of something that feels better than worse.”

Also: Don’t try to think of what interests you. Instead, think about how you’d like the world to change, and work for that.

I’m a science fiction fan and I’m interested in AI. People who know these things about me were surprised that I hadn’t seen “Her,” a 2013 movie starring Joaquin Phoenix as a man who falls in love with an artificial intelligence who lives in his phone.

I finally did see “Her” recently. The reason I didn’t see it before, and did see it then, actually relates to the theme of the movie.

“Her” is not really a movie about AI. Like most AI movies, it’s really about humanity — what makes us human.

What makes us human, according to “Her,” is physical reality — having bodies that exist together at the same time and place and talk to each other, even if we’re not even touching. There is very little human-to-human contact in “Her,” and very little touching, and what touching there is — between Phoenix’s character Theodore and a blind date played by Olivia Wilde — is bizarre and unsatisfying and sad.

People in the world of “Her” are dehumanized in ways that are recognizable extrapolations of today. Before we meet the AI that Theodore falls in love with, we see Theodore at his job. He works alone, dictating to a computer. He’s a futuristic Cyrano, ghost-writing personal letters on behalf of clients to families and friends — love letters, thank-you letters from a grandmother to her grandchild. The letters are incredibly personal, authentic sounding, and fake. You wonder if the recipient knows the letters are ghost-written, and if they do know it, whether it bothers them.

Later, Theodore, still alone, goes home and gets into some phone sex with a stranger, which starts well, but quickly turns hilarious, unsatisfying, and weird.

Theodore already does most of his interactions intermediated by machines, which is something we’re already seeing today, in the real world, so it makes sense that he falls in love with Samantha, a consciousness that exists in the machine.

Samantha, voiced by Scarlett Johansson, makes a point several times that the difference between herself and a human person is that she, Samantha, doesn’t have a body. And that’s a big deal, leading to an ending that’s ambiguous and bittersweet.

Despite Samantha’s bodiless condition, it’s possible that she is more human than the human characters of “Her.” Just a thought.

There are all sorts of other things going on with “Her” that will probably pop into my head from time to time. What’s the significance of the relationship between Theodore’s co-worker and his lawyer girlfriend? What does the movie mean when Theodore says, several times, that he and his ex-wife grew up together? The scene with the sex surrogate is priceless.

And now I’ll tell you why I didn’t see “Her” until now: Julie didn’t want to see it. Movies and TV are something I almost exclusively watch with Julie, which means I almost always only see the movies and TV we both want to see. If I’m going to do something alone I’d rather it be something other than watching a TV show or movie.

I do watch TV and movies alone when Julie is out of town and I’m home alone. That’s rare: usually I’m the one who travels. But it happened recently. We went to visit Julie’s family in Columbus, and I returned home two days before Julie. Alone in the house, I watched “Her,” and talked with Julie over Apple Messages, and talked with my friends and family on the Internet, experiencing nearly two days of nothing but relationships mediated by machines.

The couple from the Woodstock album cover are still together 47 years later. pic.twitter.com/yUH7bLNz8P

the mattress for couples with trust issues pic.twitter.com/PVFdxHvjXr