A Women’s March group is canceling its January rally in Humboldt County, Calif., over concerns that its participants would be “overwhelmingly white.”

The decision comes amid division and tension in the broader Women’s March movement, which has unified millions of women and men in protest in the past two years.

I’ve been concerned about reports of anti-Semitism in Women’s March Inc. — which is only one of several groups organizing women’s marches, although I think it was the main organizer of the big one on the past.

I’ve looked into it and it appears that the local San Diego organization is not affiliated with Women’s March Inc.

Still, I’ll probably just sit out the women’s march this year. I’m not making a huge deal out of this because anti-Semitism isn’t my only reason for sitting out the march. It’s not even the main reason. I’m just not a marcher.

“Retailers and growers say they’ve been stunted by complex regulations, high taxes and decisions by most cities to ban cannabis shops. At the same time, many residents are going to city halls and courts to fight pot businesses they see as nuisances, and police chiefs are raising concerns about crime triggered by the marijuana trade.” Also, people are just as happy buying marijuana illegally. https://www.latimes.com/politics/la-pol-ca-marijuana-year-anniversary-review-20181227-story.html

We had a couple of cannabis shops open a few miles from the house. Very sketchy. I would not have wanted them in the neighborhood. Nothing against marijuana, or selling it, but these places looked more like peep shows than any legitimate retail business.

Another one bites the dust.

46% of the population of San Diego was born here. Voice of San Diego thinks that’s low. But it seems high to me — I would have thought it was single-digits.

Our former next-door-neighbors lived in the same house something like 50 years. That’s extraordinary rootedness for this time and place. But they weren’t born in California; they moved here during World War II.

This is, as Voice of San Diego says, a city, and county, of transplants.

It’s “the Bay Area’s largest real estate purchase this year” and “the second-largest property purchase in the United States this year, eclipsed only by another Google acquisition, the $2.4 billion the company paid for Chelsea Market in Manhattan.”

I’ve become a convert to the Daylight Saving Time/Standard Time switch. Sure, it’s a problem for a couple of days – but it maximizes daylight for the maximum number of people. Year-round DST means kids going to school in the dark and getting hit by cars.

We should spend more of the year on standard time, though – six months of each, as used to be the case.

The restaurant has been closed and vacant since the 1980s, and the prominent sign is a Hillcrest landmark. I’m sure the property is worth a lot of money, but the owners didn’t seem to care.

This is an actual tweet from my town’s parks department. I am not making this up.

I did not realize that this activity involved tournaments. I don’t even want to know how the winner is decided. Or what they get for a trophy.

Come out and play cornhole! We will be in the beer garden promoting the November 5th Cornhole Tournament…. https://t.co/A4LrHtIJW9

We saw this sign on a costume shop on La Mesa Blvd.

In 1905, the California Development Company accidentally flooded a huge depression in the Sonora Desert, creating an enormous salty lake called the Salton Sea.

The water is about twice as salty as the Pacific Ocean. The ground beneath the southern end of the sea is volcanic and water bubbles to the surface in muddy pools. The only fish that can live in Salton Sea are tilapia, but even they struggle to survive.

This sea—this gurgling, sometimes stinky, accident of a sea—is actually in danger of drying up and disappearing. And you may be thinking: “good riddance!” It doesn’t sound all that nice. But the Salton Sea needs us. And we need it.

The Salton Sea demonstrates that the difference between natural and artificial isn’t as clear-cut as we often think. 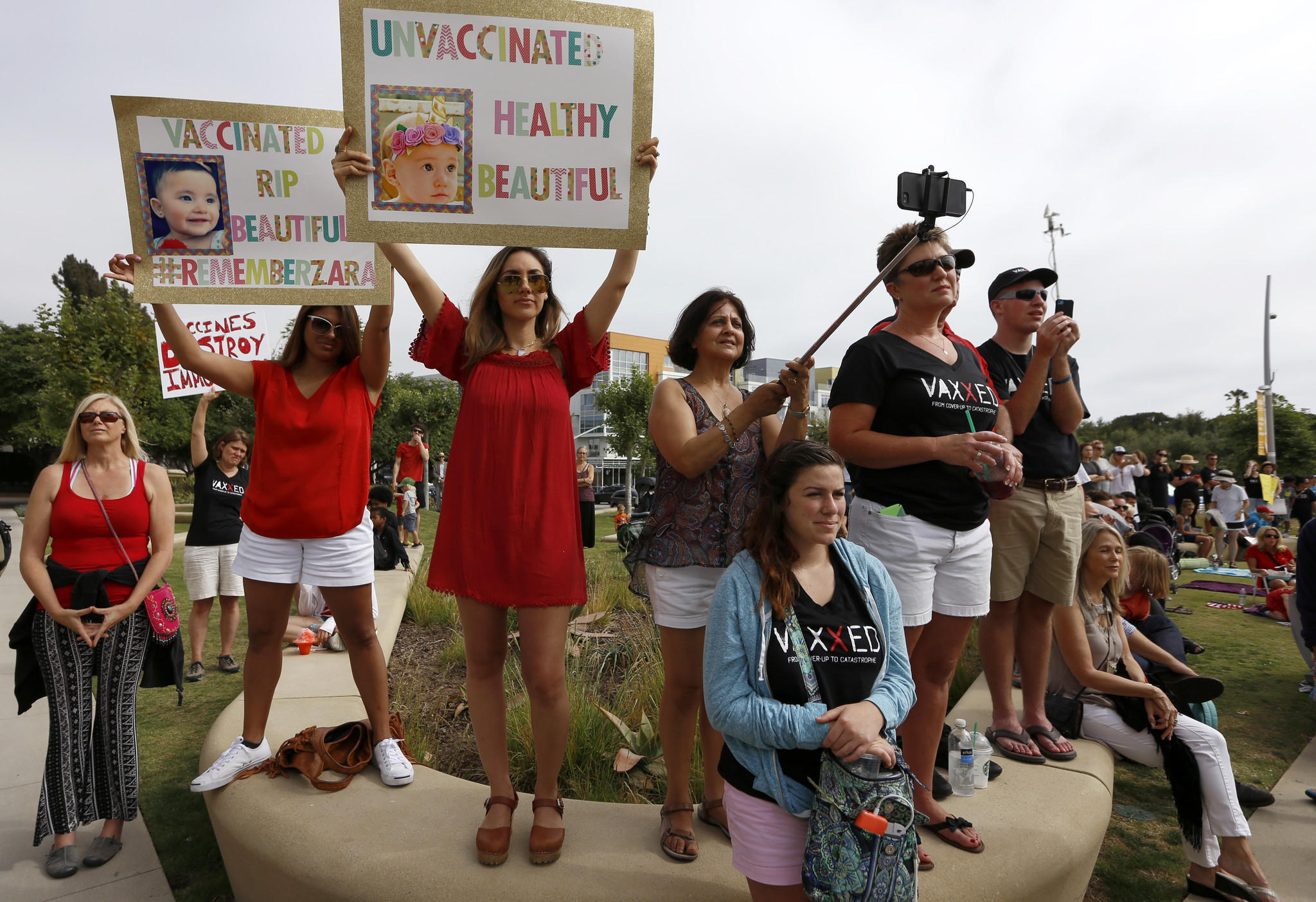 The new law, which took effect Friday, bars parents from citing religion or other personal beliefs as reasons to not vaccinate their kids. SB 277 is one of the toughest mandatory vaccination laws in the country and drew many protesters when it was debated in Sacramento.

A group of parents and the nonprofit Education 4 All filed a suitFriday to overturn the law in U.S. District Court in San Diego. The suit claims that the law violates California children’s right to an education under the state’s constitution.

“SB 277 has made second class citizens out of children who for very compelling reasons are not vaccinated according to the CDC schedule,” the plaintiffs’ attorney, Robert T. Moxley, said in a statement.

California State Assemblywoman Lorena Gonzalez named Nathan Fletcher, whom she’s been dating for a year, as Veteran of the Year.

Critics say Fletcher probably deserves the award because he is a veteran who does a lot of work for veterans but seriously?

In other news: Julie awarded me a Pulitzer Prize.

I’m curious about the requirement that drivers need to be fingerprinted. If it’s a good idea to require it for other drivers, why should Uber and Lyft be exempt?

And I’m encouraged to hear that Sacramento killed legislation that would have allowed ride share drivers to organize. We truly do have the best legislators money can buy.

Probably Clinton. But I may feel the Bern when I get into the booth.

More populous than San Francisco to the north.

Then judge me. Heh.

Cory on moving from London to beautiful downtown Burbank, California:

Burbank is its own little village. We’ve got a 2.5-mile-long stretch with no chain stores. I don’t own a car. We walk everywhere. We live five minutes from the airport. It’s very handy and weird and surreal. It’s where they shot the B-footage for ’50s TV shows, so everything feels eerily familiar in a Father Knows Best kind of way.

Burbank has just become our new normal, we’re settled in, we’re about to get our green cards. The bureaucracy is crazy, but it’s a one-time thing and that’s how I maintain my sanity, by saying, I never have to figure out how to get my Canadian long-form birth certificate again. So, I will spend this afternoon trying to figure out the office address of the doctor who delivered me 44 years ago for the Canadian government, but then never again.

On the role of fiction:

I don’t know that there’s a “the role,” but I think that one of the roles that fiction plays is that it’s entertaining. Fiction is primarily about empathy. It’s about pretending you’re someone else and experiencing their emotions. In the same way that getting a back rub feels nice, because it’s good for your muscles or whatever, I believe that thinking about what it would be like to be someone else is just intrinsically satisfying — at least for people within one or two sigmas of normal cognitive activity. Science fiction can also give us an emotional fly-through of a technology. It can be like an architect’s rendering of what it would feel like to live inside a technological regime, and so science fiction has been very useful in policy fronts in that regard.

On his next novel, Walk Away, his first novel for adults since 2009:

Walk Away was inspired by the historian and activist Rebecca Solnit, who wrote the book A Paradise Built In Hell, about the gap between how people who live through disasters experience them, how they are reported, and how political and economic elites react to them. She starts with the 1906 earthquake in San Francisco, and she shows this recurring pattering called “elite panic,” where rich people are convinced that when things break down the poor people are going to come and eat them, basically. So the rich preemptively attack the poor. Like General Funston keeping people out of the mission as it burned during the 1906 earthquake. He actually sent out detonation squads that didn’t know how to set fire breaks. They burned down a quarter of San Francisco, and didn’t let anyone go back and fight the fires in their homes. Or in Haiti — the ironclad belief that there would be food riots led to the creation of food distribution centers that were pretty much custom-built to create riots. Or in New Orleans, where there were no verified accounts of looting (as we understand it), besides people taking supplies and leaving IOU notes with the intention of settling up once the owners returned. Nevertheless there were Blackwater mercenaries and rich white neighborhood associations who were shooting to kill because they were convinced that there would be looting. There is this gap between how people behave and how elites believe people will behave.

Walk Away is a utopian disaster novel. It’s a novel about a disaster where people behave well.