Write. Make a short film. Go to an open mike. Take an improv class. There’s no substitute for actually doing something. Don’t talk about it anymore. Maybe don’t even finish reading this essay.

Plus, there are fewer people competing for heart, so you have a better chance of getting noticed.

I’ve been thinking about Mel Brooks and Gene Wilder lately. They had heart.

Lenovo’s new Yoga Book will have a touch panel that can be used as a smartphone-like soft keyboard. Or you can lay a piece of paper on the touch panel, draw or write on it using a special stylus that doubles as a pen, and the Yoga Book will capture what you write.

Great idea. Anecdotally, people who use the big iPad Pros say their typing screen on the screen keyboard rivals a conventional keyboard.

One of our most popular cartoons ever, drawn by Charles Barsotti in 2002. #TNYcartoons

Finally, some common ground. A cartoon by @tbtoro, from 2014. #TNYcartoons

So much garlic. The person sitting next to me on my flight will be so unhappy.

The description on the Fresh Air podcast makes the novel sound dreary and Good for You, like spinach:

Growing up in West Philadelphia, novelist Asali Solomon felt like an outsider. “The lifestyle I was leading was different from what other people were leading,” Solomon tells Fresh Air’s Terry Gross. “Like, my parents taught us to revere Africa — people at school made fun of Africa.”

The family celebrated Kwanzaa, the kids were discouraged from saying the Pledge of Allegiance, and the family didn’t eat pork. (“The reason for that was never quite explained to me,” Solomon says,”… but it was part of a thing at the time that I think people were taking from black Muslims.”)

Solomon drew on her childhood experience when she created Kenya, the main character in her new novel Disgruntled. Kenya, the daughter of parents who were Afrocentric black-nationalists, excels at her neighborhood school in West Philadelphia — but her success sets her apart. When she’s sent to a mostly-white private school, she worries that she’s not measuring up; she wants kids to see her as the brilliant black girl, “heir to those brave children in the south who’d shined their shoes each morning only to get kicked and spat on in their fight for a good education.”

But the interview makes Solomon — and the novel — seem warm and witty. I’m adding Disgruntled to my Amazon wishlist.

Evan Rachel Wood looks great as a young woman who seems to be unaware that she’s actually a robot and not living on the 19th Century American frontier.

And here’s the trailer for the 1970s original: 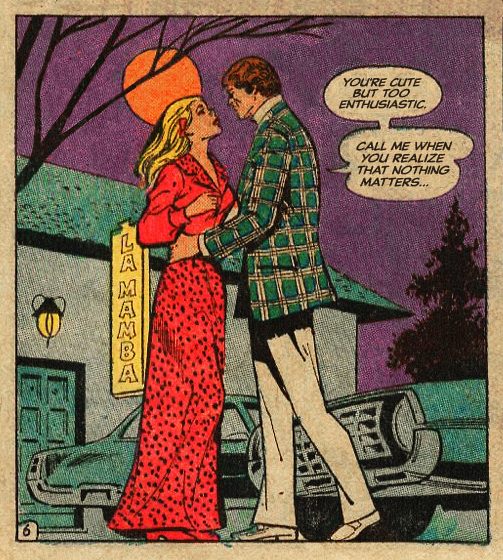 From @tedgoia via a friend. Thanks!

My guest, J.D. Vance, is the author of the new best-seller “Hillbilly Elegy: A Memoir Of A Family And Culture In Crisis.” He says the book is about what goes on in the lives of real people when the industrial economy goes south. He writes about the social isolation, poverty, drug use and the religious and political changes in his family and in greater Appalachia. He grew up in a Rust Belt town in Ohio in a family from the hills of eastern Kentucky. Until the age of 12, he spent summers in Jackson, Ky., with his grandmother and great-grandmother. Vance joined the Marines, which helped him afford college. After attending Ohio State University, he went to Yale Law School where he initially felt completely out of place. He has contributed to the National Review and is now a principal at a Silicon Valley investment firm.

J.D. Vance, welcome to FRESH AIR. There’s a paragraph from your new book that I want you to read. It’s on Page 2.

J D VANCE: There is an ethnic component lurking in the background of my story. In our race-conscious society, our vocabulary often extends no further than the color of someone’s skin – black people, Asians, white privilege. Sometimes these broad categories are useful. But to understand my story, you have to delve into the details.

I may be white, but I do not identify with the WASPs of the Northeast. Instead, I identify with the millions of working-class white Americans of Scots-Irish descent who have no college degree. To these folks, poverty’s the family tradition. Their ancestors were day laborers in the southern slave economy, sharecroppers after that, coal miners after that, and machinists and mill workers during more recent times. Americans call them hillbillies, rednecks or white trash. I call them neighbors, friends and family.

Working poor whites have been a neglected minority in the US: Exploited by the religious right and populists like Donald Trump, and scorned and ridiculed by small-government conservatives and liberals.

I want to read this story. RT @LisaDib1: "I'll explain on the way, just get in" https://t.co/tkeYUG7dLW

A cartoon by Alex Gregory, from 2005. #TNYcartoons

For the nights when counting sheep doesn't help. A cartoon by Roz Chast. #TNYcartoons

Your cat's Monday is infinitely better than yours. A cartoon by @cartoonamy. #TNYcartoons

"And, by the way, can we set up a conference call?" A cartoon by Kaamran Hafeez, from 2015. #TNYcartoons

Many happy childhood media memories: Blazing Saddles, Willy Wonka, Young Frankenstein. We quoted great swathes of dialog from those movies back and forth to each other. “What knockers!”  (Mike Barnes and Duane Byrge, The Hollywood Reporter)

No body part left behind. A cartoon by Paul Noth. #TNYcartoons

sometimes a photo is worth $3

So beautiful, so sad.

From Matthew’s Island of Misfit Toys. Thanks!

Because it’s the only place in the world where you have to specifically remember at the front desk to ask for a hotel room far away from the roller coaster.

I forgot to do that this afternoon so I will be lulled to sleep tonight and tomorrow night by the faint rumble of engines followed by “WOOOOO!”